This item is for disc only in perfect condition, with little to no scratches on the disc, no case, artwork, or manual included.

The Smurfs are back in an all new dancing video game, based on the best-selling Wii games, Just Dance & Just Dance 2. Kids and parents will dance to popular, top of the chart songs in this fun, high-energy game with their favorite Smurfs characters. The Smurfs' game is based on Sony & Columbia Pictures’ upcoming hybrid live-action/CGI blockbuster movie releasing July 29, 2011. 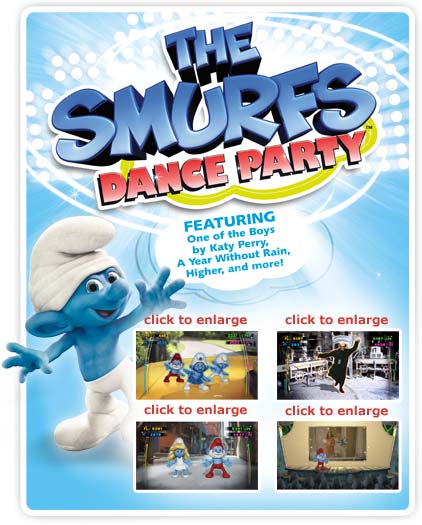 The track list for The Smurfs Dance Party mixes a collection of chart-topping pop tunes with classic dance hits, including Katy Perry's One of the Boys, Barbra Streisand, and Walk This Way, among many other famous songs kids and parents will instantly recognize. In addition to popular pop, rock and dance tunes, The Smurfs Dance Party also features classic original songs from The Smurfs, including Smurfberry-licious and Gargamel.

Want more Smurfs fun? Be sure to check out The Smurfs, exclusively available for Nintendo DS/DSi.

With a hundred different Smurfs running around Smurf village, give or take a Smurf, it can be a difficult task to keep everybody happy. You have to have patience, brains, maturity…and perhaps a beard. As the wise leader, Papa Smurf truly embodies these qualities and really knows how to handle his Smurfs. When Papa's magic foretells of impending disaster, he faces his biggest challenge yet: going toe-to-toe with Gargamel and leading the Smurfs safely through New York City!

There's something special about Smurfette. Whether it's her beauty, sweet voice, charming personality, or the fact that she is the ONLY girl among so many boys, she makes the other Smurfs go absolutely gaga. With a smart, savvy attitude, she'll prove what a pint-sized punch she has when she comes face-to-face with her creator.

If it wasn't for bad luck, Clumsy Smurf wouldn't have any luck at all – wherever he goes, calamity is sure to follow. Clumsy's good intentions pave the road for trouble – and this time the road he chooses leads the Smurfs into a strange new place: New York City. But everyone has a hero inside of them, and when his other Smurfs need help, Clumsy will prove that you can be more than a name.

If every village has its idiot, then every village also has a Brainy. Overeager and a bit over-educated, he's a "know-it-all" who really doesn't…know it all. Brainy is Papa's self-appointed right-hand Smurf, even if he is annoying at times with his encyclopedic knowledge. He may just be the Smurf you want to cast a spell when Papa's not around.

Before determining that every Smurf is all about happiness, sunshine, and rainbows, you need to meet Grouchy Smurf. He hates sunshine, rainbows make him sick, and happiness makes him unhappy. However, somewhere underneath all the scowling and grouching is a heart of gold.

If ugly had a name, it would be "Gargamel," and if obsession had a face, it would look like Gargamel. This evil wizard is consumed by all things Smurf. They're all he thinks about, all he talks about, and all he's ever wanted! Gargamel will do anything to capture a Smurf, including chase them to New York City, all in the hope of becoming the most powerful wizard in the world.